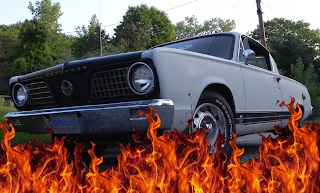 Have you ever worked on something for so long you just got tired of it? So much so that even the thought of it made you want to do it less and less? Thats how Iv'e felt for the past year. Except for me, it's not just working on my car, it's working on the entire EVBC club itself.

My car is one thing that needs some attention. It needs a vacuuming and a good wash. The interior needs a wipe down and the chrome polished. The Windows need washing and the bumpers and mirrors need a polish too.

I didn't get to Carlisle in 2011 but made a few cruise nights and car shows at home, In 2012, none. No car shows, no cruise nights. I took the car nowhere special. I drove it when the wife's car was in the shop and she drove my daily driver. Iv'e driven it a total of 6 times this year.

I've been running, promoting and building our Car Club for over 11 years and was running various car sites for 5 years before that. Iv'e had my 'Cuda for at least that long. I think I really just needed a break from the constant involvement with the collector car hobby. I even thought perhaps I would sell my car in the near future just to pass it on.

I Thought I was done.

I've see it before. You read about it on the various forums or from people at car shows. "Where'd you get that car?" I picked it up cheap from a guy who got tired of it".

I didn't want to be that guy. So what changed? I'm not really sure. The wife kept commenting on the Copper 2012 Ram 1500 on the local dealer lot. It really is a nice color and I thought it would look great on my 'Cuda with the black side stripe. We looked at possibly trading in our 2005 Jeep Grand Cherokee for that truck. Well, we owe more that its worth right now so that plan came off the table quick.

...and that's kinda when some switch deep in the dark recesses of my brain switched on. I can't say why but I sorta feel like my heads back in the game. I hope its not a temporary feeling.

In the next few weeks I'll be reviewing the website and Facebook site to see where improvements and additions can be made. I'll pour over the Google group for significant threads that can be used and archived on the website and the blog will get a few more updates.

Oh, and I will probably clean up the 'Cuda before it gets too cold outside but I will still drive it on nice days. Like today. Man it felt good blasting down the highway with the windows down and the radio up!

Roger, you're not alone. I think anyone who has been involved in the old car hobby has their ups and downs. Especially if you don't have the resources to see a project to completion in a timely fashion, it's easy to loose the enthusiasm (I've recently switched jobs and just don't have the spare money to throw at a hobby car anymore). I've personally cut way back on car shows. Lately I'm just finding it boring to hang around for eight hours looking at the same cars. Of course, Carlisle is a different situation because of the variety of cars but more importantly, I'm sharing the experience with my EVBC friends.

I've been to maybe two other car shows this year. I try to make more cruise nights, hanging out for a couple of hours. But you know what? I still enjoy tinkering with my Barracuda from time to time. There's always minor things that need attention. How about if we plan a drive together for local EVBC members? A drive through the countryside with a destination for lunch or something? Doesn't have to be this year.

Roger,
This post is eerily reminiscent of what I was going through about 2 months ago. I was at the end of my cars rope. After doing all that I ever wanted to do to it, short of installing a 4 speed, I took off on a wild tangent and installed a 6 cylinder just to do a turbo setup. Now I had a built to the gills 408 stroker on a stand and a running Turbo 6 in the car that received far more attention than "another V8 in a Barracuda". So where next? Actually drive it somewhere? Well its been non-op'd for 3 years now and the thought of driving it with its new disc brakes and taller rear end was enough to make me sweat behind the wheel. Not from its abilities, but for how much of my time and energy was put into this car, only to have it subjected to the "other" drivers out there. Uninsured, under-insured or even insured but to the blue book of the car if damaged? Imagine a "written off" check for 1200 bucks from an insurance company? Well, during that low point, My car was no longer a retreat from the daily grind.
Then something happened: My lousy radio in my garage went out. Small boom box with 5W speakers (if that) and a cassette player. I needed something in there when I was working on any other project that I could find. Sensing my funk, my wife forced me to take a few needed days off and clean the much neglected garage. I cleared off my workbench, tossed 2 cans of scrap and regained my workspace and found about 15 tools that I had written off too. I bought an old receiver off craigslist and a set of nice speakers that needed to be reconed and refinished. After I finished the speakers, I had a sound in that garage that I had never experienced. Loud, quality music from a repaired turntable, CD changer and even internet radio. I found myself listening to old music with an appreciation that I never gave it. Being able to rattle the garage door with "Hot for Teacher" re-ignited memories of blasting the same song 25 years ago in my first Mopar, ironically a '65 Barracuda. Not the same one resting quietly on jackstands in my new man cave, but one in far worse condition, one that I had such fond memories of in high school. That was it, the spark I needed to get "back in the game". I have since been to a large Mopar show out here and the passion is back. Im installing subframe connectors tomorrow and flaring some new brake lines, and 2 missing center caps as well as some Valiant side spears for a little bling are in the mail to keep the drive alive. Im back, baby!

I, for one, am glad you're back. my sister all but abandoned me with our 'Cuda project, so i was excited to see some helpful info in your blog posts!
Jen@Barracuda Diaries