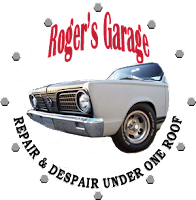 
they also used bias ply tires,drum brakes,points,am radio...etc.
but i'll take a radial tire, disc brakes, electronic ign and a fm,cd,aux imput radio in my car every day of the week.according to your logic we may as well still be using a horse and carriage.

The first poster is of the camp that makes a big issue that its a GM/Chevy component being installed on a Mopar. BLASPHEMY! But think about it. Who really makes the components for our cars? Does the factory make every component? Who is the company who makes the Electronic Distributor for the Mopars? Prestolite. Who makes the carburetors? Carter. Not Chrysler? Not Dodge? Hmmmmm.

For the 1966-1967 Barracuda, who makes the disc brakes, Kelsey-Hays. Also found on the same era Ford Mustangs. Who makes the windshield washer motor? FoMoCo in some cases. Auto manufacturers will buy various components from various vendors at the lowest cost possible to make their cars as inexpensively as possible. One vendor can supply components to many manufacturers.

The first camp would think nothing about installing a Holley or Megasquirt injection system on their car but who did they copy to make theirs? GM. And GM didn't even make it, they bought it from another vendor.

The purist camp says that its easier to trouble shoot and repair issues on the side of the road with the stock systems, that parts are easily available at any parts store. Guess what? The same goes for the improved ignitions that have been adapted to be used on Mopars. You just have to troubleshoot different components.

The bottom line for me is that I can appreciate all cars no matter how they are built. I'm a "Car Guy". I choose to drive a Mopar but if you have a really nice Nova or Falcon, I will tell you you have a nice car. If you choose to keep your car factory stock or perform upgrades that were only available from the factory that is fine by me.

If you go all in with an Altercation K member, Coil over springs, modern Hemi engine swap, 6 speed manual trans with 4 wheel disc brakes, anti lock upgrade to your 8 3/4 rear diff and full on custom interior, then that's OK too.

But don't bash the up-graders with your purist opinion. And don't ridicule the stock folks for being dinosaurs. Offer the knowledge and experience you have and let the individual decide how they want to perform upgrades or repairs to their cars.

These are cars. This is a hobby. This is not a religion. Have tolerance and understanding for your fellow Car Guy or Gal. "Mopar or No Car" is a great slogan, just don't be to fanatical about it.

nice post! I'm new to the car thing, so it is mostly funny to me when I read the back-and-forth between the two schools of thought. I'm going 'factory' re-build as much as possible, just to keep from having too much on my plate as far as conversion. my brother on the other hand wants to turn ours into a race car!